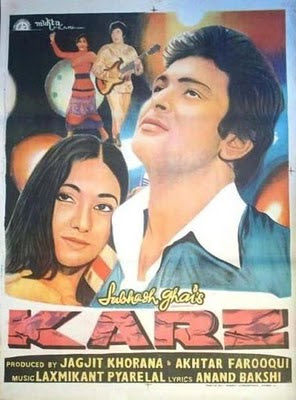 ~ Rishi Kapoor at the top of his game in fabulous outfits? - Check.

~ Tina Munim in all her glorious beauty and girl next door charm? - Check.

~ A gangster don who just happens to be mute and communicates through his henchman by tapping his fingers on glass tables in code? - Um, ok, check.

~ The above henchman played by actor Mac Mohan and whose screen name just happens to be Mac in EVERY SINGLE ONE OF his movies? - Now just wait a second...

~ The above mentioned gangster recruiting someone to do an evil deed that ends in deception, murder and eventually... reincarnation and revenge? - Yowza! 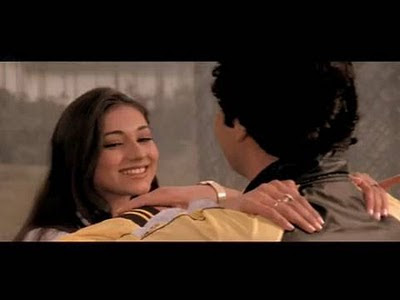 'Karz' is fondly remembered even today, considering that the title of it's most famous song was used for Shah Rukh Khan's movie 'Om Shanti Om'. SRK's film is considered a loose remake of 'Karz' as many critics acknowledge that the original was well ahead of it's time. The movie is a masala flick of legendary proportions in that it crams so much damn stuff into 159 minutes of madness that it's almost too much. But as is the case with most masala movies, the trick is to cram just enough with the use of big stars, amazing songs, crazy plots and in the case of 'Karz' - bringing back a legendary actress (Simi Garewal) in a deliciously evil role. It's a Rishi Kapoor star vehicle through and through and he carries the masala thali like only a select few can. Watch (or re-watch) the movie all over again - but since it has reincarnation as it's central theme - maybe you already did ;)

The film's famous (and Filmfare nominated) title song was actually posted last time around thus today's song is the Bollywood version of "I am sixteen going on seventeen". An uber cute duet sung by Kishore Kumar & Lata - Tu Kitne Baras Ki (video below)