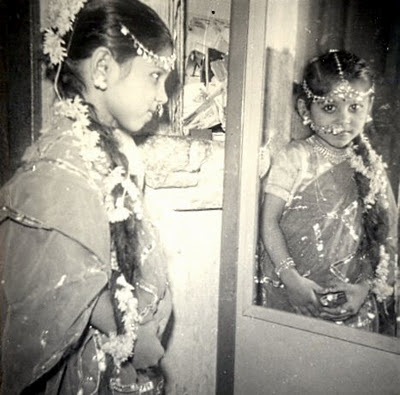 My wife getting ready for garba in Baroda (Gujarat) circa 1975


Navratari began this weekend & will be celebrated over the next nine nights (in Sanskrit, nav-nine & ratri-nights). It honors the female spiritual force in nature & the goddesses associated with it. The farming communities of ancient India had much free time after sundown as the days were busy spent tilling the fields. Thus evening was chosen as the ideal time to celebrate the counterpart to the male (purush) forces that Hindus believe created the universe. 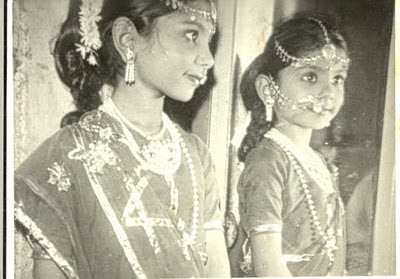 My sister-in-law doing the same


The nine nights are dedicated to the goddesses Parvati, Lakshmi and Sarasvati. On the first 3 days the goddess Parvati is invoked as a powerful spiritual force to help destroy one's impurities, vices and faults. For the next 3 days, Lakshmi is worshipped in her various forms as the goddess of peace, wealth and bliss. However, fulfillment here is more important than wealth itself. As the goddess of wealth she governs not just monetary goods but also spiritual wealth such as friendship & peace within. The final 3 days are for Sarasvati, the goddess of wisdom. She is the goddess of the spiritual knowledge and the knowledge that frees us from this bind of Samsara or the material world. A period of introspection and purification, Navaratri is traditionally an auspicious time for starting new ventures. On the tenth day of Navratri (Dussehra) an effigy of Ravana is burnt in parts of India to celebrate the victory of good (Ram) over evil. 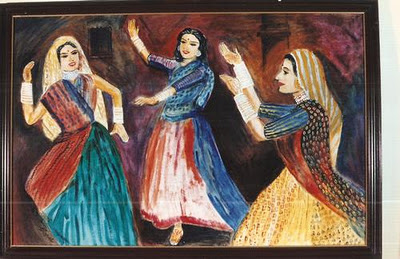 This festival is celebrated differently depending on which part of India one is from. In my native Gujarat it is as garba & raas - folk dances with complex circular formations to represent the design of the lotus and other configurations considered mystical & auspicious. The word garba comes from the Sanskrit word garbha deep. Garbha is translated as a womb & Deep means light. This garbha deep is placed in the center of the dance circle with a flame (symbolizing life) in a pot (symbolizing the womb of mother nature). Although dandiya raas is associated with garba, it's origins are slightly different - it was traditionally performed by men patterned after sword fighting but is now a highlight for all during Navratri.

The two songs for today are traditional Gujarati garba songs whose simple yet elegant arrangements are a contrast to the Bollywood songs we are used to hearing (although the above Bollywood song is played alot during the season towards the end of the night). The first tune is a traditional one Ramo Ramo by Meena Patel, a truly joyous song that helps paint what Navratri in India may feel like if you were actually there. The second song is Pankhida by Praful Dave and is my favorite garba song.
Posted by Sanket Vyas at 12:15 PM 10 comments: