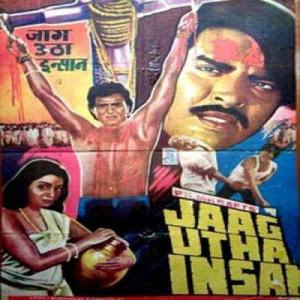 It's been awhile since I posted something and rather than doing my usual movie review, I figured I would share some found treasure. You know the feeling you get when you find money in your pockets that you completely forgot about and it's like finding something brand new? That happened to me but instead of money it happened by way of song and in a way that's much more valuable. As most of you know, I am one of the biggest Kishore Kumar fans you could ever care to meet and in fact - I stopped watching Bollywood movies altogether after his passing in 1987. I own pretty much everything he ever did in my music collection and his voice brings joy to me in ways that only one's favorite singer/band could. So when I stumbled upon a duet of his on YouTube (thank you technology!) that was sung with Asha Bhonsle, you can imagine my excitement. I felt like Indiana Jones finding lost Mayan treasure and that's honestly not a hyperbole. For not only was it a song that I hadn't heard before - it was a stunningly beautiful one. And to top it off, the song starred two of my favorite actors - Sridevi & Mithun Chakraborty! And yes the actual picturization of the song just brought it to another level of awesomeness.

What did I love so much about this song?

~ No goofy outfits - Mithun wears a traditional Indian kurta with a dupatta and sandals to match that would look good even today. Sridevi wears only one sari throughout the entire song (much to the chagrin of 'multiple outfit changing' song lovers everywhere).

~ No 'fake' instruments - songs from the 80's in Bollywood were infested with terrible synthesizers and drum kits to an excess. Music composer Rajesh Roshan (uncle of Hrithik) used traditional Indian instruments throughout this song which makes it evergreen in every sense of the word.

~ No armies of background dancers - yes they are a standard of big production songs from the early days of Bollywood to present but sometimes less is more. And when you have two stars like this to carry your song then you really don't need all that filler. Which leads into...

~ Lots of Sridevi & Mithun doing what they do best - from the moment where Mithun puts Sridevi's 'ghagra' on her feet you realize that you are in for something special. Add in the fact that both of them are accomplished dancers themselves makes you believe what's happening on the screen is truly real. And when Mithun starts playing the flute for Sridevi's dancing and then washes her feet with water from the sea? Done.

~ The fact that the song itself is amazing both musically and lyrically is obviously what made me want to devote a whole post to it today. Old is definitely Gold as far as Indian songs go in my world even though I have gotten several requests to review some new movies/post some new songs. But if you hear a song for the first time isn't it new to you? Unearthed treasure is still treasure in my world.

And the reason I won't see the movie? With a song this wonderful I know that seeing the movie will only serve to diminish how much I love it. Just because the director nailed it on one song doesn't necessarily mean he did so for another 3 hours as well. And since the song is a dream sequence why muck it up with reality? Granted, it was produced and stars another one of my old school faves Rakesh Roshan (better known as Hrithik's dad) but in this case ignorance is truly bliss.

After I wrote this up, I noticed that someone had put together a 2 minute summary of the movie. It pretty much solidifies my decision to not watch the movie :/