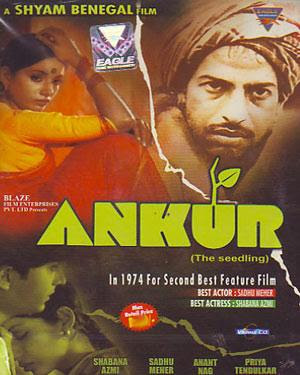 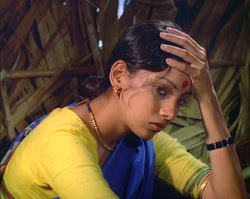 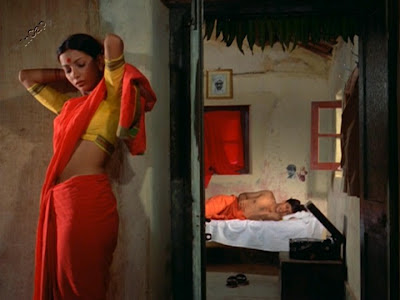 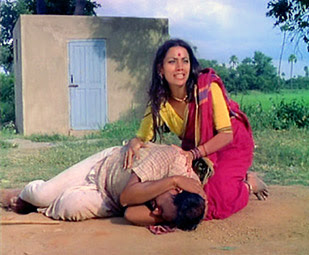 As a true art film 'Ankur' did not have any original songs per se but I did manage to track down the one song that was playing on the radio at several different times in the movie. It is Yehi To Hai and is vocalized by the late Mohammed Rafi. It is from the 1958 movie 'Solvan Saal' starring Dev Anand & Waheeda Rehman - who incidentally was the first choice to play the lead in 'Ankur' but declined - interesting choice of a song in my opinion.
Posted by Sanket Vyas at 8:00 PM 3 comments:

'Pinjar' is an unflinching look at the partition of India through the eyes of one woman. Urmila Mantondkar gives an amazing performance as Puro, the daughter of a wealthy landowner whose life is completely changed by a centuries old family feud. It explores the issues of Partition as well as the the status that women occupied in Indian society then and to an extent even today. Manoj Bajpai also turns in a career defining performance as Rasheed and gives incredible depth to a character who has committed a grievous sin but manages to atone for it in the end. It is one of those acting feats that I always marvel at - playing a character who is not entirely good nor entirely bad - a difficult balancing act of portraying someone who walks the fine line between both. I just don't understand why Urmila doesn't appear in more movies - she looks as luminous as the day her career was launched in 'Rangeela' 12 years ago but it is her acting is what gives this movie it's soul.

The partition of India & Pakistan has been a particular passion of mine for many years as the human drama behind it is as fascinating as it is tragic. The consequences of Partition are something neither country has fully recovered from nor properly dealt with to this day. I have recommended this book in a prior post, Freedom At Midnight. It is must reading for anyone of Indian descent or anyone interested in the history of the subcontinent for that matter. The book was written by two French authors and will give you a real understanding of how and why Partition came to be. It explains that both Jinnah & Gandhi (although he bitterly opposed the idea until his death) believed that Partition would serve to solve many of India's problems and were horrified at the carnage that ensued. It also explains how a British lawyer named Cyril Radcliffe (who knew little about India and could thus stay 'unbiased') was given the duty to divide up the country into India & Pakistan just 36 days before August 15, 1947 - the date of independence. It was a date cursed by the stars according to the astrologers and led to horrific atrocities including looting, rape, murder and resulted in the single largest migration in the history of the world. How to divide the libraries of the bisected states of Punjab & Bengal is just one of the fascinating stories in this book, now out of print but easily available at Amazon.

The song from the movie is Charkha Chalati Maa sung by Preeti Uttam. It visits a theme seen previously in films like 'Umraoo Jaan', basically that it is a curse to be born a woman on this earth. Which begs the question, who would all these wonderful sons of our world be marrying if there were no women around? What happens to Puro is tragic and infuriating at the same time, society is coming around and changing but recent events tell us that women's rights in that part of the world still have a long way to go.
Posted by Sanket Vyas at 5:24 PM 2 comments:

Continuing our tribute to the newlywed Bachchans we take a look back at Abhishek's debut film, Refugee. The pressure on him when this film opened must have been just incredible for the simple reason that his performance would not be compared to other actors. No, it would be compared to arguably the most popular Bollywood actor ever, his father - Amitabh Bachchan. Adding to the hype would be the fact that the film would also be the debut for none other than Raj Kapoor's granddaughter, Kareena Kapoor. The result? A solidly entertaining movie that received mixed reviews but proved that both stars had some solid acting chops, genetics maybe? The movie also did quite well at the Filmfare Awards that year - winning for best debut performance (Kareena), best dialogue, best cinematography and best song which is one of the selections for this week.

I really enjoyed this movie for many reasons including the fact that it had a very different story, incredible cimematic shots, great performances by all involved and of course - fantastic songs. Abhishek did an admirable job of carving out his own style of acting, reminding us of his father but using his own abilities to make the role his own. Kareena was a real eye opener as well - she portrayed quiet grace and dignity that far surpassed the fact that this was her first movie. Also, Sunil Shetty finally acted for once and gave some real substance to the character of the Pakistani policeman with a strong moral backbone (a rarity in Bollywood where caricatures are the norm). Yes, it did have some cheesy moments but they are forgivable in the context of the message of the movie - namely, we (Indians & Pakistanis) are really not all that different so why can't we just get along?

The two songs from the soundtrack are Mere Humsafar and Panchhi Nadiya the latter of which won the Filmfare Award, both sung by Sonu Nigam & Alka Yagnik. And lastly, one final picture of the new groom getting mehndi put on him before his wedding - after succeeding on his own and one of the best actors in Bollywood today he definitely has made papa proud.

Congrats to the Bachchan newlyweds!

Just spent a wonderful weekend at the New Orleans Jazzfest listening to alot of great music & eating some fantastic food - a must do for anyone that loves food, music and hanging out just enjoying life (always taking place the last weekend in April and the first weekend in May). What pray does that have to do with Bollywood? Nothing, but the weekend left me feeling lazy and that combined with the fact that we just had to pay tribute to the shaadi of Bollywood's golden couple led to this short but heartfelt two parter of a post...

'Kajra Re Remix' probably was played plenty of times at their wedding, would have led to mass partying at Jazzfest had it been played and will most likely lead to a random act of dancing in your living room upon hearing it. It's from Bunty Aur Babli, a fun little movie with Abhishek & Rani Mukherjee that marked the first on screen pairing of father & son Bachchan. This song was the show stopping item number with none other than Aishwarya herself. Check it out here. Next week a look back & a listen to the songs from Abhishek's debut movie, Refugee.
Posted by Sanket Vyas at 4:36 PM 4 comments: