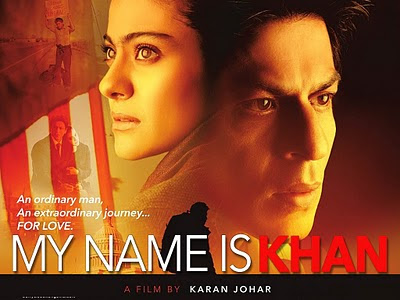 Shah Rukh Khan's first film to be partly financed and distributed by a major Hollywood studio (Fox Searchlight) borrows a bit from a few Hollywood movies and weaves in a couple American tragedies to craft an entertaining if somewhat inconsistent movie in 'My Name is Khan'. Equal parts 'Forrest Gump', 'Rainman' and Bollywood - if the director (Karan Johar) had just tried to do a little less he would have had a much better movie to showcase SRK's foray back into acting. I say back because I have gotten a bit tired of his portrayal of Rahul (from DDLJ, KKHH, Yes Boss and countless others). And his (over)acting was pushing him dangerously close to the career path of Rajesh Khanna whose adherence to the same sad sack roles doomed his career. SRK did an admirable job in his portrayal of Rizwan Khan, an immigrant from India afflicted with Asperger's Syndrome. My friend Regina pointed out that in the trailer it looked like SRK was portraying a blind man and in some ways individuals afflicted with Asperger's are indeed 'blind' to their surroundings and the individuals around them. I have seen many patients with the affliction in my practice and SRK nailed the nuances of the disorder without going overboard or overacting in the role. For a politically incorrect (complete with inappropriate language) yet accurate explanation of what I mean go here for a scene from the movie 'Tropic Thunder' ;) 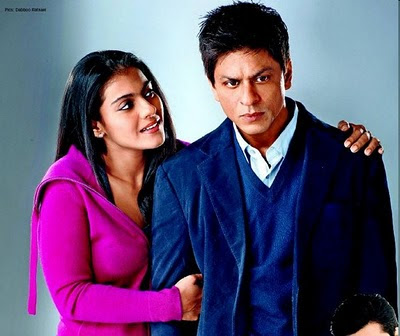 The movie also marks the reteaming of SRK & Kajol - arguably the most successful pairing of actors from modern day Bollywood. The story revolves around Rizwan's move from India to the United States and how he met and subsequently fell in love with Mandira (Kajol). The love story angle is standard fare for an Indian movie but with a twist this time around as Rizwan is not your standard golden boy movie hero and Mandira is a Hindu with a teenage boy. Their lives (and those around them) are forever changed and scarred by the events of 9/11 and the movie takes a real look at how many Indians & Pakistanis were treated in the days/weeks/months after and continue to deal with the ramifications of to this day. The movie also looks into how ordinary people (both Indians & Americans) can resort to violence to deal with problems beyond their worst nightmares. It's all a little complicated and to add to the already tragedy laden plot, the story has Rizwan stop along in Georgia to deal with a Katrina like hurricane and help rescue a town that the federal government neglected. I lived in New Orleans when Hurricane Katrina hit and obviously the scope of the tragedy was far beyond what the movie showed and the inclusion of the hurricane into the plot was a bit unnecessary. However borrowing a page from 'Forrest Gump' it did serve to put our very Indian hero smack in the middle of his second very American tragedy. 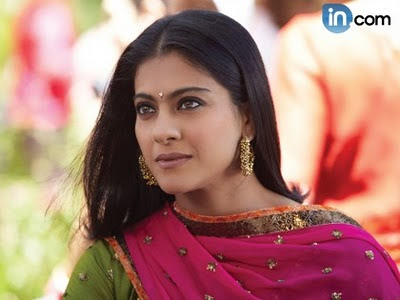 It all boils down to a very watchable and entertaining movie that fans of SRK and Kajol will most likely enjoy. The messages are somewhat heavy handed and like most Bollywood movies the film goes on for about 30 minutes too long. But like I said in my post prior to watching the movie, I was most interested in seeing if Shah Rukh Khan was going to step out of his comfort zone and actually act instead of going through the motions and he did not disappoint. Kajol does her usual Kajol thing and maybe it's her turn to step outside of her comfort zone and do a role ala Nandita Das or Tabu that stretches her abilities as an actor but that's a post for a different day. My main quibble with Kajol though? At the risk of sounding shallow I will say that seeing her on the big screen for the first time in years had me gasp a bit because of well... the sheer bushiness of her eyebrows. I know one is supposed to look past all that and she has gone on record to say that she refuses to wax or thread them to preserve a more 'natural look'. Well if you are going to do that then why shave your legs or wear make up? Why not just go natural for your whole look instead of just parts? Just my two cents but judging from what many people have said I am certainly not in the minority in my views on 'Eyebrowgate'.

The title song of the movie Tere Naina (sung by Shafqat Amanan Ali) is one of my favorite songs of the year and today's addition to the jukebox. Ali is a classically trained artist and founded the highly successful Pakistani band Fuzon. He left the band after being featured more and more in Bollywood movie productions and also sung the title song (Yeh Honsla) to one of my favorite Bollywood movies, 'Dor'. While the movie grossed the highest opening weekend and opening day overseas for a Bollywood film, only time will tell if the film is as fondly remembered as SRK's other hits. It's definitely worth a watch and very much more than just a 'time pass'.
Posted by Sanket Vyas at 2:17 PM 14 comments:

SRK previews 'My Name is Khan' - no more Rahul?

I am going to see 'My Name is Khan' tonight on the big screen and have heard it's already breaking box office records in India despite the controversy associated with it's release. The build up to it's release has been huge considering that it stars Shah Rukh Khan, Kajol and is directed by hit maker Karan Johar. SRK plays a man afflicted with autism and as a psychiatrist I have a very personal interest in seeing how he and the filmmakers pull this off in a Bollywood movie. I don't expect it to be the time honored song and dance movie that we are used to but for me that's a good thing. 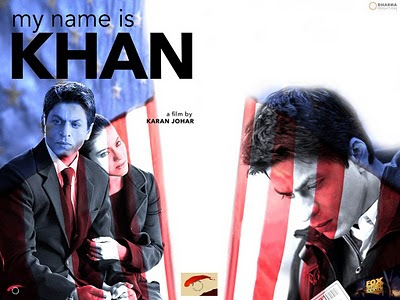 Not that I mind the tried and true 'classic' Bollywood movie but I am not sure the subject matter (autism and the treatment of Muslims in post 9/11 America) would necessarily work with it. Plus, I would love to see SRK challenge himself and NOT play the character of Rahul for once - which he has seemed to have done in every film since DDLJ. Now I am not a SRK hater, in fact I go out of my way to see every one of his movies because he is an immensely entertaining actor and his movies are a joy to watch. Due to his status in Bollywood royalty his films have great production values and often turn out well.

But success has a dangerous way of making one complacent and SRK too often falls back on the tried and true Rahul in what seems like every role he takes on. Where is the actor who started his career with the little seen miniseries 'Fauji'? Or the one who played a psychopath to perfection in 'Darr'? I'll even take his art house experiments with 'Paheli' and 'Hey Ram' even though they weren't necessarily commercial successes. Rajesh Khanna's star once shone brighter than SRK's or even the legendary Amitabh Bachchan's but his insistence on playing the same sad sack character as well as his limited range as an actor led to his eventual downfall.

As evidenced by the clip above Karan Johar thinks he has something special with this movie and here's to hoping that SRK decides to go along with him and do something different with himself. Maybe King Khan thinks that if he strays too far from his formula for success his fans won't come along for the ride. But as another Khan (Aamir) has shown us - if an actor gives the audience a performance they can believe in, they will follow him and the box office grosses will follow.
Posted by Sanket Vyas at 11:10 AM 5 comments: