The songs and history surrounding Mehboob Khan's classic 'Anmol Ghadi' have captivated me for as long as I can remember. The movie marks the oldest Bollywood film I have ever seen and while the actual plot is not particularly interesting, it's the story behind the story that made watching this movie an absolutely captivating endeavor. Today's post is a joint one with our friend Richard over at Dances on the Footpath who writes about classic Indian cinema and has posted some amazing songs from youtube up on his site as well. This tale from the maker of 'Andaz' (the only film that starred Dilip Kumar, Raj Kapoor & Nargis) and 'Mother India' (the first Indian film to be nominated for an Oscar) revolves around a pair of childhood sweethearts - Lata (Noorjehan) and Chander (Surendra) who reunite years after a tragic separation. A melodramatic love triangle ensues when Basanti (Suraiya) falls for Chander and he can't bear to tell her the truth of who he actually pines for. Lata & Basanti both fall for Chander and the only real question I had while watching was how and why these two enchanting women would fall for such a bore such as Chander. But like I previously alluded to, the real reason to watch this movie is for the historical importance of this movie and to see the picturization of the classic songs that are still hummed today more than sixty years after the movie's release... 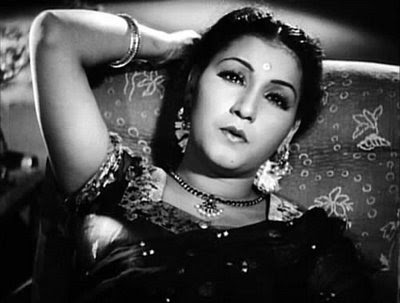 Noorjehan (above) was the top box office draw in India at the time of this movie's release and was known for her acting ability as well as her incredible voice. Not considered particularly 'beautiful' in the classic sense, she nonetheless had a radiance that transcended any preconceived notions about beauty. However historical events were conspiring to take this rare talent out of Bollywood for good when the Partition of India occurred the following year and Madame Noor chose to leave her fame and fortune behind and move to Pakistan. Had she chosen to remain there is no doubt that she would have commanded the silver screen for years to come as she was beloved by both the movie going public as well as the film industry itself. It's quite ironic that her character's name in the movie (Lata) was also the real name of the person who benefited most from her departure. Lata Mangeshkar was not well known at the time of Partition but emulated Noorjehan's voice early in her career and the two remained close throughout the years with Lata referring to Noorjehan lovingly as 'Didi' (sister). This movie is Noorjehan's swan song and her performance as well as her renderings of it's signature songs help make this movie a must see for any true Bollywood fan. 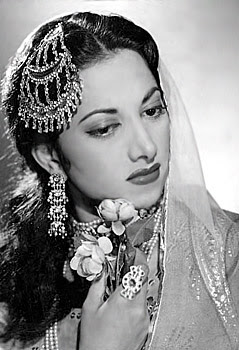 Suraiya (above) was also an established star when Mehboob Khan approached her to complete his coup of bringing together three of the biggest stars of the day for the film. She, along with Noorjehan and Surendra, were among the last of a dying breed in Bollywood - that of the actor who also provided his/her own playback singing. It is difficult enough to be skilled at one much less do both so well and the fact that she was just seventeen when this movie was made makes her performance even more incredible. Her songs are well known to true film aficionados and her place in Bollywood history was cemented with this star making turn. Like Noorjehan, her voice was not as high as Lata and her compatriots but was resonant and uniquely hers instead of being indistinguishable from the masses. She had the unenviable task of being the 'other woman' in the movie but succeeded in making her character likable and injected much needed cheer into the often gloomy story. 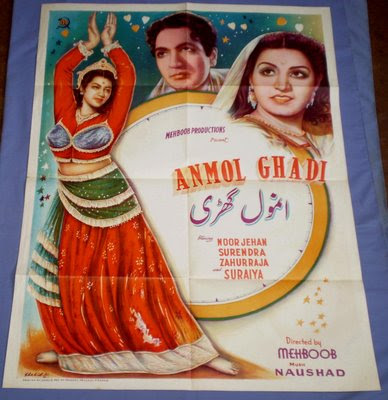 The film was a massive hit when it was released and represented one of the final hits in the Bollywood of undivided India. The city scenes provide a rare look at Bombay from a simpler age and one can just imagine how Marine Drive must have been without all the smog & traffic from modern times. Yes, the acting is a bit dated and the use of the static camera shot on song sequences can feel a little odd. But if you just tune out the story and concentrate on the two leading ladies as the songs tumble onto each other in the narrative - you will be rewarded with a rare look into the beginnings of modern day Bollywood. The sense of history behind this film becomes even more apparent with the knowledge that all Indian movies were banned in Pakistan after Partition. The image above is of the first poster printed in Pakistan for an Indian movie (note the lack of Hindi script present on the original poster) due to the immense popularity of 'The Nightingale of Pakistan' - Noorjehan. She returned to Bombay in 1982 to receive a special award for her contribution to Indian Cinema and Lata's speech welcoming her back to the land of her birth was said to have all of Bollywood's elite on their feet.

The songs from today are both by Noorjehan, one solo song and one being a duet by her and Surendra. Jawan Hai Mohabbat remains one of those evergreen songs I could hear over and over yet never tire from. Her voice, it's lyrics of eternal optimism and musical score (done by my favorite composer Naushad) all combine to make this a song that always puts me in a better mood when I hear it. The other song, Aawaz De Kahan Hai is the polar opposite of the first one and highlights Noorjehan's ability to evoke an emotion in a song even if you don't understand a single word of Hindi/Urdu. It's by far Surendra's best work in the movie and allows the audience to feel their longing for one another throughout the years through it's timeless melody (video below).

A nice three part retrospective of the Big B....