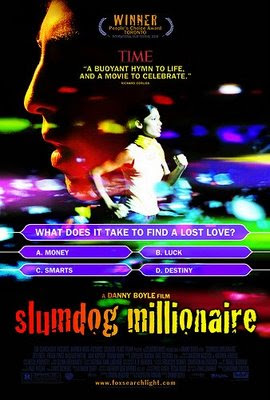 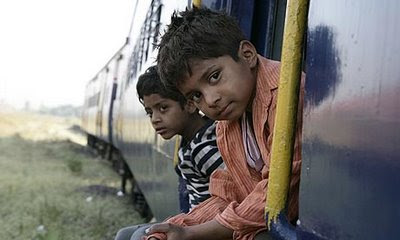 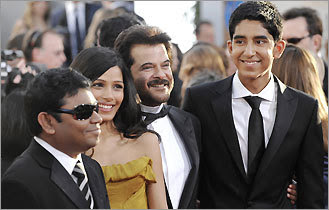 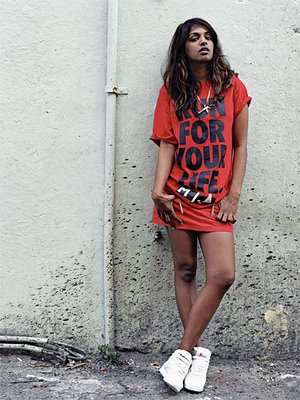 *Evdience that 'Slumdog Millionaire' has already achieved success in the US that is usually reserved for Hollywood productions - the yellow scarf that Freida Pinto is wearing in the movie has been on the 'must have' lists in many a gossip rag. Adding to the mystery of the movie, the wardrobe designer says it was a one of a kind piece that would "bookend the journey--to tie her childhood yellow dress to her final look".
Posted by Sanket Vyas at 3:01 PM 9 comments: 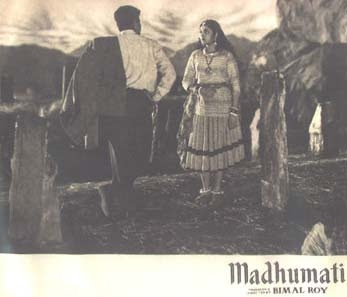 "On a dark and stormy night" is how Madhumati begins and director Bimal Roy sets a dreamy yet uneasy mood so well that the audience follows with a feeling of nervous excitement through the rest of the movie. Indeed the movie holds up well nearly half a century later because of the concerted efforts of it's makers, stars as well as it's unforgettable soundtrack. Madhumati was well rewarded for it's efforts with nine Filmfare Awards, commercial success and was a darling of critics as well. It was Roy's second win in the short life of the Filmfares as he had also won best director in the inaugural Filmfare Awards in 1953. Technically speaking it is not as polished as the films of today for obvious reasons but watching legends such as Dilip Kumar & Vyjayantimala on the screen together are worth the time invested viewing on their own. Add to that the breathtaking scenery (even in black & white), the original story with a Sixth Sense like twist at the end and the pitch perfect soundtrack and this movie becomes a must watch for Bollywood fans both new and old alike.

The jewel of this movie however is the soundtrack. Salil Choudhury triumphs as the music composer in what is considered his finest and most commercially successful movie. He grew up in the tea growing state of Assam and spent many a day in his youth trekking with his forest ranger father. Madhumati is said to have been an ode to that time in his life and the songs match the story of the forest maiden and her Prince Charming rather well. In fact the entire movie's mood and ambiance is framed brilliantly by it's editor (Hrishikesh Mukherjee) who not only won a Filmfare Award for his efforts but also became a celebrated director in his own right.

Lata counts Aaja Re Pardesi as among her ten best recordings ever and earned her first statuette with her rendition of the song . "I love all the songs of Madhumati but this one was special and I still remember how happy everyone was on the day it was recorded. Lyricist Shailendra gave me flowers and then Bimal Roy himself came forward to congratulate me! The song was beautiful and it was such a big hit too." The three songs for today include the aforementioned Aaja Re Pardesi, Bichua and my personal favorite - Zulmi Sang Ankh Ladi. Below are the videos of the songs and following them are screencaps from the movie with commentary.


On a dark & stormy night Devendra (Dilip Kumar), an engineer, is traveling with a friend on a lonely highway to pick up his wife and child from the railway station. A landslide blocks their path and the two take shelter in an old mansion nearby. Devendra finds the house uncannily familiar and in the large front room he finds an old portrait which he recognizes. His friend and the old caretaker join him, and Devendra, amidst flashes of memory from another life, sits down to tell his story while the storm rages outside. Like his Hollywood counterpart Cary Grant, Dilipsaab was class personified and was devastatingly handsome to boot. 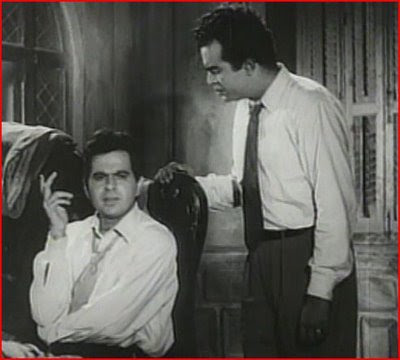 Comedian Johnny Walker (who took upon the name of the scotch favored by the British Raj during their time in India) provides the comic relief as the assistant to Devendra. Most roles he undertook required that he be intoxicated at least some of the time, I don't recall him ever being sober through a whole movie. 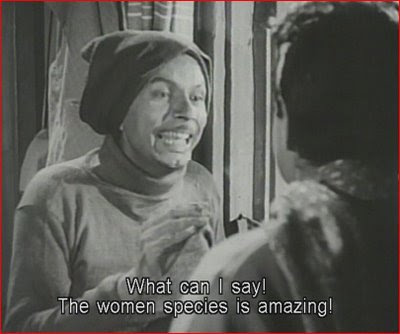 I love the way the audience is introduced to Madhumati (Vyjantimala) - as Anand (Dilip Kumar's character in the flashback) is looking for the woman behind the enchanting voice he keeps hearing during his time in the forest. The mountain mist parts to show her to us and him for the very first time. This film rocketed her to the top tier of Bollywood's stars and earned her the Filmfare Award for best actress not only for her acting but for her formidable dance skills as well. 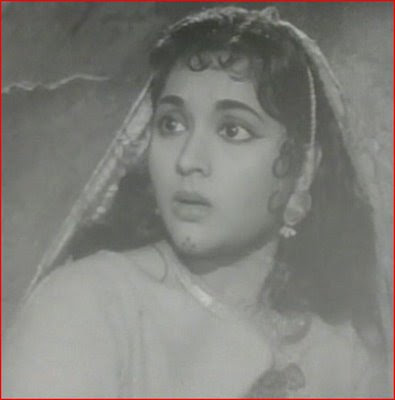 We come to find out that the young forest maiden lives alone in a log cabin with her Paul Bunyan-like father and he is an imposing figure indeed. Anand not only proves his mettle by sneaking into her house to meet her during the evenings but also wins over dear old dad who has a centuries old feud with Anand's employer. 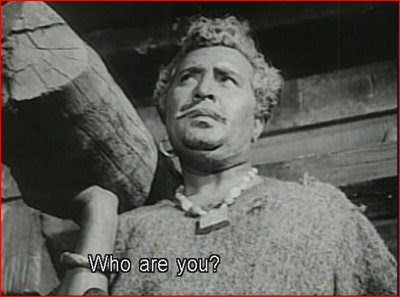 Ugranarayan (Pran) is the zamindaar (landowner) who is Anand's boss and in addition to having a very intense name is also a ruthless and arrogant man. Anand refuses to bow down to him and has a showdown with him that unfolds in the film's climax. Is is it me or does Pran look an awful like actor Jon Lovitz? And why do zamindaars in Bollywood always have to be so evil? 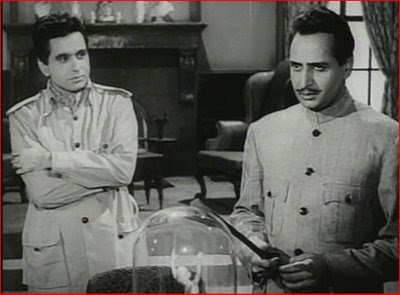 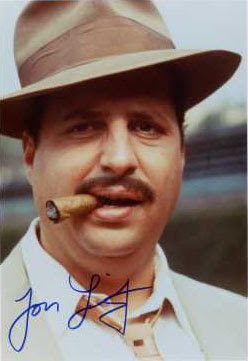 The foreshadowing in the bichua (scorpion) song that takes the movie into it's second act. As stated earlier, the director's deft hand gives the movie an eerie mood right from the beginning scene and never really lets the audience feel comfortable with what is happening on screen even during the romantic scenes. We know that something terrible is coming but the way the plot finds it's way to a satisfying end makes it all well worth it - even 50 years later.