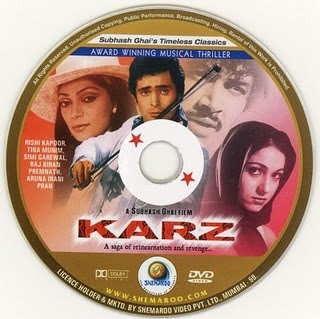 What better way to celebrate the holidays and the coming of old man winter than with another installment of 80's Bollywood Cheese? Today's song is a true classic that not only was one of the biggest hits of it's day but was the inspiration for a modern day Shah Rukh Khan movie. The song? Om Shanti Om from the 1980 movie 'Karz' (in debt). The movie stars two of our all time favorites here at Doc Bollywood - the incomparable Rishi Kapoor and the luminous Tina Munim. It also scored a coup with the casting of Bollywood legend Simi Garewal in a role that earned her a later career Filmfare Award nomination. 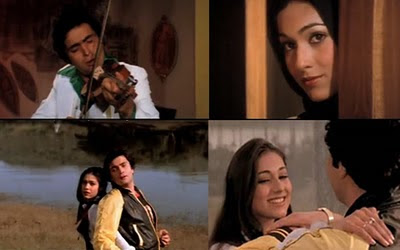 This movie has all the necessary elements to be one of those great group watching experiences - great stars, a maddeningly twisted story involving murder/revenge/reincarnation, an amazing soundtrack and fabulous fashions. The official movie review will be coming shortly but until then just sit back and enjoy Kishore Kumar's ten minute opus of the song mentioned above. The video has furry dancing shoes, bongos, a four way split screen, a giant spinning record player and Rishi Kapoor coming in on the needle of that very giant spinning record player. And that's just in the first MINUTE. As I have dared you in the past - just try to sit still while the song is playing, just try...