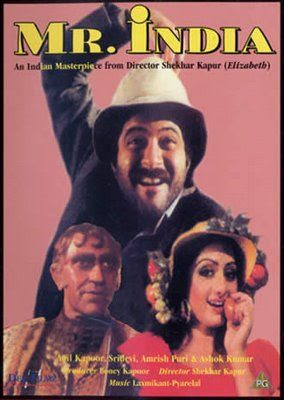 The late 80's were a time of great flux in Bollywood. Amitabh Bachchan's reign at the top was slowly grinding to a halt due to a spate of questionable film choices, an injury during the filming of 'Coolie' and his foray into politics. A chance meeting between Bollywood newcomer Anil Kapoor and art film director Shekhar Kapur (who between them had exactly 2 hits to their name) led to the creation of one of the most beloved films of Indian cinema - 'Mr India'. The hyper-success of 'Sholay' in 1975 had inspired every producer of that time to try and recreate the winning formula of that film with varying results. During this time period the art film market had just started to find it's own audience with Kapur's own 'Masoom' as one of it's earliest hits. But along came this little film (one of my wife's favorite movies) with absolutely no budget, an unconventional love story, a bunch of adorable little kids, starring Anil Kapoor and a very evil villain - all helmed by a director who knew next to nothing about making a traditional Bollywood movie. The film went on to become the biggest hit of the year and remains a cult classic to this day and yes, I do realize that the previous sentence could describe 'Slumdog Millionaire' just as easily as it does 'Mr India'. 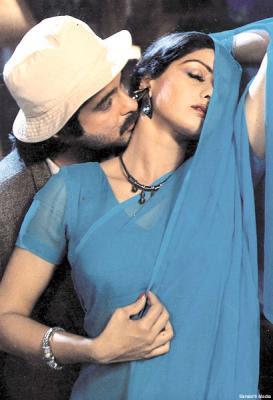 Anil Kapoor was not the most logical choice to star in this story of a fellow with a heart of gold who took care of a bunch of orphans while living in a dilapidated house on the beach who proceeds to fall in love with Sridevi and eventually would go on to defeat a villain named Mogambo bent on world domination by accidentally stumbling upon a cape of invisibility (really). The actor had only few films under his vest but was not a big star by any sense of the word. But the success of this film combined with the Filmfare Award he won for his previous one 'Mashaal' had every magazine anointing him the heir apparent to Amitabh Bachchan. Now I am one of the biggest Amitabh fans to walk the planet but I don't even think Amitabh could have been the heir apparent to himself after the mega success of his storied career. Sridevi was an already established star but cemented her reputation as one of the most bankable actresses of her time with her role in the film. Shekar Kapur inexplicably left world of Bollywood after this movie to direct the Academy Award winning 'Elizabeth' but left a nice little legacy in Indian cinema with this movie, the above mentioned 'Masoom' and 'Bandit Queen'. 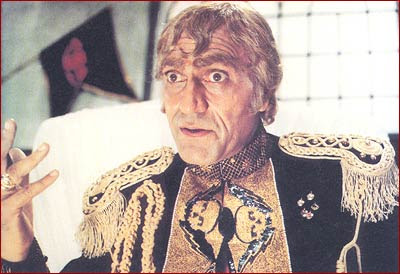 And of course one can't forget Amrish Puri's unforgettable performance as Mogambo, the villain whose quest for world domination and penchant for referring to himself in the third person with the unforgettable tagline of "Mogambo Khush Hai" (Mogambo is pleased). Yes, he may have achieved wider recognition with his roles as the good yet stern father in 'DDLJ', 'Pardes' and 'Viraasat' but he created one of the most memorable villains ala Heath Ledger's Joker with this nefarious evildoer. Shekar Kapur was reportedly interested in making a sequel (with his uncle Dev Anand as producer) but talks stalled and his name was withdrawn from the project. But as things somehow do in the magical world of Bollywood there will be a fairy tale ending to this story after all. Anil Kapoor & Sridevi have signed on to reprise their original roles and none other than SRK himself is in talks to tackle the role of Mogambo! The song for today is Zindagi Ki Yehi by Kishore Kumar and was one of the last songs he recorded before his untimely death that year. It's a toe tapping tune with a great message that basically states that life just is and that every bad thing is inevitably followed by something good. The video below is from The Parody Song and you can play a rousing game of "guess the movie" from all the songs contained in it.

i love sridevi and anil k. together..those kids are all grown up now

oh i am so so worried about the 2nd Mr India! I do hope it works out- love love love Sridevi!

Well that settles it--Mr. India goes onto the evergrowing list!

Been looking for a good Sridevi film to watch--good to see you back, Sanket!

PPCC - And somewhere out there, Amrish Puri bhi khush hoyenge.

JJC - They were a great duo and Sridevi is one of those actresses (like Rekha) that just grew more beautiful and graceful the older she got. It must be something in the water down southside!

Shweta - I worry whenever they try and make an 'Any movie 2' but as long as they try and go with the feel of the original with the same stars (Munna Bhai comes to mind) I am hopeful that it will work out. I don't see Sridevi sitting idly by without some sort of input into her comeback film.

Nida - Thanks Nida, it's good to be back! April is tough month to get anything done in New Orleans thanks to the great weather and all the festivals (Strawberry Festival, French Quarter Fest & of course Jazzfest). Add to that the joys/wonders/work of a 6 month old and that whole work thing and you can see how time just flew. But Bollywood waits for no person and it feels great to be back ;)

Bollywood said...
This comment has been removed by the author.
2:22 PM

TBF - Saw the link from your website and that is wayyyyyyy cool that you got to meet Mr. India himself! I didn't start out as the biggest Sridevi fan but slowly came around and now she is one of my all time faves. To see her and Anil on screen together again would be an amazing experience indeed - but sadly no Amrish Puri :(

I'm yet to find a bollywood film buff who can name all the songs from the Parody song in this movie, i only know about two or three

I guess that means Doc Bollywood has a challenge! I will work on it and get back to you with a complete list next time I get with our Bollywood-fanatic friends.

can u tell me the titles and movies of the real song in the parody song??

lovely review...I love this film to bits and it was one of my favourite movies of the 80s..

Notwithstanding, please lets get our FACTS right in order not to misinform people...HUKUMAT starring Dharmendra and Rati Agnirothihi was the Biggest Money spinner of 1987 with Mr India coming a close second..