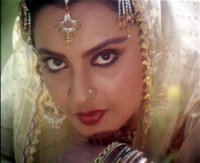 The sequel to the timeless saga 'Umrao Jaan' opens tomorrow and a whole new generation will see the often duplicated story of the courtesan with a heart of gold. Rekha's portrayal of this doomed heroine earned her the National Award for best actress back in 1981 and is considered her finest performance. Whether Aishwarya captures that same magic with Abhishek Bachchan remains to be seen. This is the 2nd of 3 big remakes of 2006 (aka the year my Bollywood memories were pillaged) that began with 'Don' and with 'Sholay' left to go. Call me old-fashioned but some things are timeless and need to remain untouched - tomorrow will tell if perfection can indeed be improved upon.

In Ankhon Ka Masti & Dil Cheez Kya Hai are the 2 evergreen classics from the movie and are both sung by Asha Bhonsle (Lata's younger sister). The lyrics, music & style of both songs made them #1 hits then and both remain classics to this day. See Rekha recreate life in 19th century India here and here.
Posted by Sanket Vyas at 4:04 PM

I was also a sceptic, especially after hearing the sound track. Alka Yagnik just didn't hold a candle to Asha. But I was pleasantly surprised by the movie. It has its flaws - not perfect like the original - but Aish was outstanding especially in the final mujra. It would be a shame if people didn't see her because of prejudice.