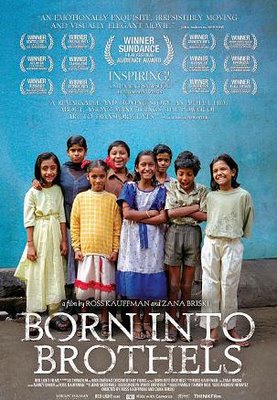 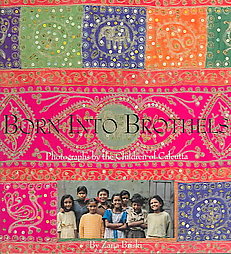 Officially speaking, India has had three movies that have been selected by the Academy of Motion Picture Arts and Sciences (Oscars) but none has ever taken home the golden statue. That drought ended last year - not with a big Bollywood production or even an art film but with a small documentary - 'Born Into Brothels'. In 1995 New York photojournalist Zana Briski went to India to document the harsh conditions for women in a developing country. She was interested in female infanticide, child marriage, dowry deaths and widowhood. A friend took her to Sonagachi, a red light district in Calcutta and "from the moment I stepped foot inside that maze of alleyways, I knew that this was the reason I had come to India." Briski developed close relationships with the women and then with their children.

Briski noticed the children were fascinated with her and her photography and got the idea to teach them to document their lives with their own photos. She chose children who were eager to learn and gave each a point and shoot camera to use. Even though Briski had never used a video camera before, she decided to film the process. What happens when the line between merely documenting tragedy and doing something about it become blurred?

The answer lies in this poignant story of how these children are taught to visually record their lives in the squalid margins of society. We witness the frustrations, victories and disappointments that ensue in a world where criminals' children are stigmatized and not accepted into private schools. These students come from several generations of sex workers and drug dealers where the girls constantly face the imminent specter of 'joining the line' to earn money for the family. The children have witnessed and experienced things that most of us never even have to think about. They are treated as little adults who have to cook and clean from early morning until late at night while neighbors hurl profanities in their direction throughout the day. Just when the movie starts getting too heavy the children get an unexpected advocate to help change their lives - themselves. Don't miss the special featurette on the DVD that shows their lives 3 years later which is as moving as the film itself.

The 2 songs for today are from the soundtrack of the film. The 1st one is a simple yet elegant classical composition consisting of only two instruments - the Tabla & Flute. The 2nd song is Gopala by Krishna Das, a musician originally hailing from New York. Das is an accomplished singer in the Kirtan style of chanting (invoking the name of god multiple times). Used by many religions throughout India, Kirtan is one of the oldest forms of meditiation whose origins trace back over 500 years. While it is somewhat strange to hear ancient Hindu chants sung by a self-described 'ordinary white guy lucky enough to have found India',the resulting music will surprise you. To learn more about Krishna Das go here, to learn more about Kirtan go here.
Posted by Sanket Vyas at 3:21 PM

This movie has been on my radar since it first started getting Oscar buzz. Your review just moved it to the top of my must-see list.

ive had gopala stuck in my head since seeing the movie a few months ago. im really not all that familiar with indian culture, but ive been trying to find out what the lyrics to this song mean. from what ive been able to find so far its a religious chant invoking gopala who is the supreme god as a boy tending cows? is this correct? any help in translating this would be greatly appreciated.

yes, I would like to see a translation of Gopala also, can anyone provide one?