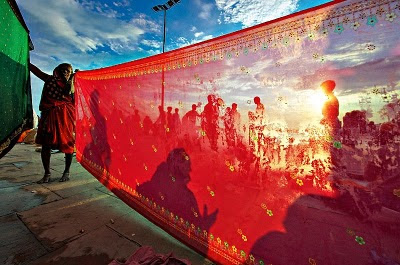 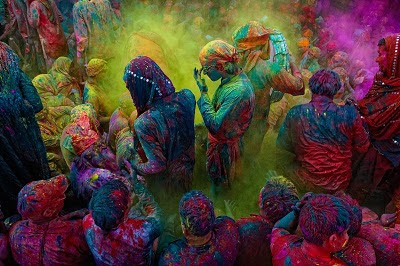 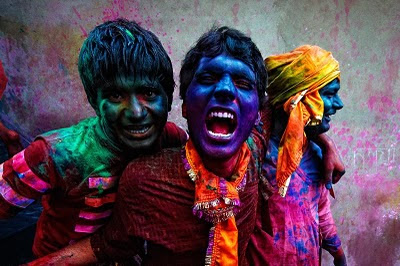 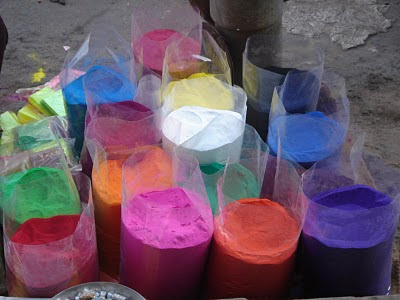 Today's selection comes from the movie 'Aapas Ki Baat' which was released in 1981. Most of you (including your own dear Doc) haven't heard the song till today due to that OTHER holi song that was also released that year - Rang Barse from 'Silsila'. However this tune is not just a throwaway and actually has a great melody, fun lyrics, huge cast of villagers dancing in almost perfect unison and of course the most essential element for any holi song - Bhaang! The song is Rango Mein Rang sung by Kishore Kumar and Lata. It stars the very underrated Raj Babbar and some assorted fat men serving as the ambassadors of coloring the town red.
In the end though, maybe Holi is kind of a metaphor for life - you see, without song, color and dance - life just isn't complete.
Posted by Sanket Vyas at 10:25 AM

I love the last line, it's so true.

Happy Holi to you as well Shweta Bahen :) I had originally included the song from 'Sholay' but for some reason could not upload it to my radio.blog

I had written about how Jaya's expression is the most powerful thing in both songs - in 'Sholay' when Amitabh is dancing and catches her gaze at the top of the hill... I just get goosebumps thinking about it. It kind of is Abhishek's first movie role too as she was pregnant with him at the time of the shoot!

I was just telling shahnaz earlier that i wanted to play holi!! "Rang barse" is my all time favorite holi song. Good one, bhai!

Hello, Sanket, happy Holi! Thank you for this very informative explanation of the mythological origins... I should have been more curious and looked this up before, but I've always been happy just to see all those colorful Holi celebrations in Bollywood films, so that was enough for me for a while. :) (I guess you don't see these kinds of festivals in the U.S. I see Diwali celebrated in Jackson Heights with lights in the trees and that sort of thing, but I have never seen big crowds of people running around and spraying each other with colors!)

As you probably know, this isn't my favorite Holi song (which I just posted about - it's from Navrang), but this song is good, and I agree with you completely about Jaya being one of the most underrated actresses!

Nice blog reallyt, we need such blogs really, to share such inofrmation.

Hello! I chanced upon your blog today, its very well written! I'll certainly revisit. I too have a little Indian music blog and I too chose the same Holi song :)

Great post Sanket! Makes me feel like being in India :(
I love how you tie in the tunes into everything! Watching rang barse was great.

Well you know Shef - songs are just the soundtrack to life just as they are to Bollywood as well!