He was one of those 'once in a lifetime' superstars for a generation and a movie star in every sense of the word. His unbroken string of 19 hits from 1969's 'Aradhana' to 1972's 'Shehzada' is an unduplicated feat that stands to this day and cemented his status as one of Bollywood's elite. My parents were still in India during his heyday and long have told me that Rajesh (at his peak) was a bigger star than Amitabh - something that this Amitabh Bachchan loving child of the 80's simply could not comprehend. It's only recently that I have come to appreciate the legacy he left behind. Science defines a supernova as a star that is extremely luminous and causes a burst of radiance that often briefly outshines an entire galaxy, before fading from view over weeks or months. It's a very accurate description of Kaka's ('uncle' as he was affectionately known) career in the Indian film industry. His fans were overwhelmingly female and they swooned over him like no other hero before or since - often 'marrying' his picture before their own weddings. His flaring nostrils and subtle head movements in romantic tear jerkers was something the audience had never seen before but his limited acting ability and narrow range was something that they tired of just as quickly. But for those 3 years he owned the industry like no one before him as he was as handsome/romantic as Dev Anand, roguish as Raj Kapoor and tragic as Dilip Kumar. Interestingly enough, Amitabh Bachchan's first film debuted in 1969 but he didn't have a breakthrough hit until 1973's 'Zanjeer' - coincidence? Maybe so but considering his biggest role before that was a supporting actor in 'Anand' - maybe not. 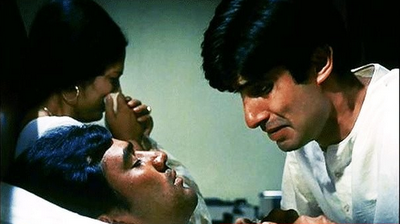 To be honest, I never really was a Rajesh Kumar fan or at least I thought I wasn't. I first started watching Bollywood films in the 1980's and a steady diet of Amitabh Bachchan & Shashi Kapoor movies were pretty much all this NRIT (non resident Indian teen) needed. Sure, there were other heroes - namely Dharmendra, Jeetendra, Vinod Khanna etc - but Rajesh Khanna's filmography never registered much in my list of must see movies. They were always a fringe movie watching experience for me as in that they were VHS rentals by my parents from our local Indian grocery store that served as quaint background chatter in my world. But something interesting happened, I realized that the actor that I knew as "that guy from Haathi Mere Saathi" was the same one that kept popping up on the 'Best of Kishore Kumar' VHS compilations from those same grocery stores. Kishore Kumar was my favorite singer but what I didn't know at the time was that his career had all but stalled in the late 1960's. That is until the 27 year old Khanna broke through with 'Aradhana' and in doing so resuscitated Kishore's career with it. Kishore flew to the top of every actor's playback wishlist after that movie and he was unmatched in his popularity until his death in 1987. Would Rajesh Khanna been as big a star if not for the overwhelming popularity of his movie's soundtracks? The world will never know but he had this to say in an interview from 2009 "I will just sum this up in one sentence. I told Shakti Samanta (the director of 'Aradhana') that Kishore Kumar was my soul and I was his body." The world of Bollywood is indeed a wonderful one and it's ability to make new fans out of the stars of yesteryear through it's evergreen songs is one of the myriad of reasons why. 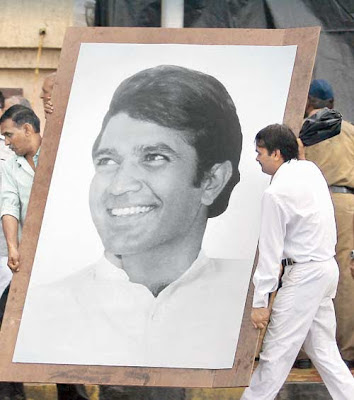 You don't have to be a great actor to be a star and no one embodied that more than Rajesh Khanna. He wasn't a bad actor mind you, just not a great one but then again he didn't have to be. Even his most hardcore fans would admit that his acting chops left something to be desired but the bottom line was that he was very good at what he did. His style was unmistakable, fun to watch and continues to remain so to this day. And then there are those wonderful Kishore Kumar voiced songs which will continue to speak to new fans of Bollywood for years to come. S.D. Burman had composed all of the songs for 'Aradhana' to be sung by Mohammed Rafi but after recording only two of them, Burmansaab fell ill. The work of completing the soundtrack fell to his son (and relative newcomer) Rahul Dev Burman. R.D.'s vision of the remaining songs were to have them sung by Kishore and it seems like they were tailor made for his voice. Roop Tera Mastana is the song selection from that movie for today. Kishoreda won a Filmfare Award for best song of the year and it's video is memorable for more than just the remarkable show of unspoken lust between the actors for that day and age. As a fan of cinema it has always impressed due to the fact that the whole song is done with one continuous shot - without any lip synching, costume changes or fancy sets. No wonder Rajesh Khanna's trip to superstardom was launched by this movie.

Growing up, I wasn't really a Rajesh Khanna fan either. However, I used to love watching Agar Tum Na Hote, Haathi Mere Saathi, and Dhanwaan as a little girl. I want to catch up on all his old movies. Can you believe I haven't seen "Anand"?! Anyway, great post as always! I was actually waiting for your Rajesh Khanna post :)
-Nafisa