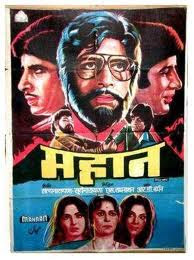 Two months have come and gone in 2012 and the dearth of 80's cheese on this site is just appalling. Therefore we knew that the first post on this topic had to be something... epic. And what could be more epic than the Big B in his prime in not just a single, not just a double but in an over the top (yet to be duplicated in Bollywood) TRIPLE ROLE. The movie review is coming soon but for now we will concentrate on the delicousness of one of R.D. Burman's craziest songs that sounds like he was channeling his inner Bappi Lahiri. 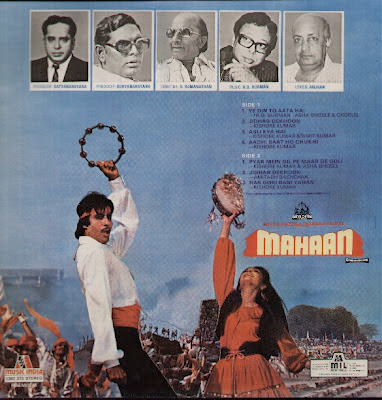 ~ The song starts out with some crazy xylophone music along with the sound of a gun firing (often). Add in the fact that this is done in front of large crowd AND on the grounds of a temple(!) and you know this is going to be something special. Bathroom break be damned.
~ Notice the awesomeness of Amitabh's white pants AND his black leather jacket completely covered in holes. Bullet holes I would like to think.
~ The yellow fiesta dress is proof positive that Zeenat Aman looks good in anything.
~ AB doesn't really have great dance moves throughout the song but the slow motion special effects more than make up for that fact.
~ Great touch... Amitabh's gun goes off by itself right when he is about to kiss Zeenat. Hehe.
~ At the 2:00 mark we have some comic relief when AB sits down to flirt with two girls who are watching the filming. Kind of tough to swallow considering who his gf is on screen :/
~ Surprisingly there are no costume changes whatsoever during the song but at the 3:23 mark AB rocks some totally cool Terminator shades.
~ During the dance sequence that follows I find that I am watching AB with much more attention than Zeenat. The man has mad skills, what can I say?
~ And near the end of course comes the same thought that I always have when watching some of these videos... I have got to figure out where they shot this and go there to re-enact it the next time I go to India.

"....I have got to figure out where they shot this and go there to re-enact it the next time I go to India."

This is not shot in India but Nepal :-) specifically the Pashupatinath temple in Kathmandu, the capital.

Just last week we did some "desi" karaoke and I sang this song! Love it!

Just last week we did some "desi" karaoke and I sang this song!! Love it! - Nafisa

Suhan - thanks for the info! The locale did look Nepalese to me and it's good to know for my (hopeful) visit there soon :)

Tagalong - LOVE doing Desi karaoke and these songs from the 80's are the best for doing so. Thanks for stopping by!

This is a great blog site for someone to refresh old memories. Since this entire site is dedicated to your parents, I would like to share a link here with you: http://bit.ly/J9RVh8. This song is dedicated to the singers mother who is a teenager and thinks big.