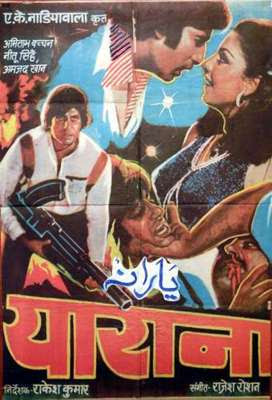 In 1981 Amitabh Bachchan was at the absolute pinnacle of his popularity in Bollywood. His hits were not only this film but 'Silsila', 'Naseeb', 'Kaalia' and 'Lawaaris' as well. It seemed that everything he touched turned into box office gold and this movie was no exception. It was well received at the box office and the soundtrack was a resounding success as well. I remember this movie fondly not only because of AB but because it was the first movie that I had seen with Amjad Khan playing a good guy. It was a real shocker to see the actor who brought Gabbar Singh to life in 'Sholay' play someone with a heart and even all these years later I remember thinking he was going to turn on AB any minute and just start shooting.

The story is about two best friends (played by AB & Amjad Khan) Kishan and Bishan respectively. They grew up together in a small village and Bishan went off to the city to get an education and when he returned years later to visit he found that his old friend Kishan had an amazing singing voice and vowed to make a star out of him. Plenty of high jinks ensue when the country bumpkin Kishan is taken to the big city and introduced to the wonders of modern technology. My favorite sceene is when Kishan (growing tired of singing lessons) attempts to get himself kicked out of dance class and an all out brawl ensues. Neetu Singh (in a very underutilized role) plays the love interest but is given surprisingly little to do. Like most Bollywood movies the story gets rather silly at the end and goes on for far too long but it was good for the time. 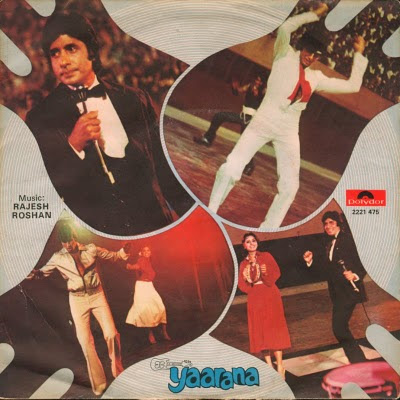 Our friend Beth over at Beth Loves Bollywood had a very different opinion of this film (she hated it) and after reading her post I do get where she is coming from. I saw this film as a 13 y.o. teenager in full hero worship of Amitabh Bachchan but my parents, aunts & uncles all enjoyed the movie as well. Is it a cultural thing or does it just not hold up well over time? There is a heaping dose of physical comedy in the movie and an equally heaping dose of melodrama as well. 'Do Aur Do Paanch' was made just a year earlier with the same director/star and had much of the same elements in it but rewatching that recently was a blast. I have not seen 'Yaarana' since my original viewing and maybe it's best that I keep it that way to preserve the magical memories. And if you do want to undertake the viewing of this movie - do what we do when watching these masala AB movies from the 70's & 80's... Don't worry too much about the plot and fast forward to the songs as well as the scenes with AB himself ;)

At the end of the day though, this movie is remembered for the same reason that many not-so-good Bollywood movies are considered classics - the songs. Yes, there is the now legendary lightbulb suit song Saara Zamana that I wrote about a few weeks ago but the entire soundtrack is just phenomenal. Kishore Kumar was at the height of his career as well and in addition to the high energy songs he gave us two wonderfully tender ones as well. The video for Chookar Mere Man Ko can be found above. My personal favorite though is the song for today's post and is one of the best odes to friendship ever written - Tere Jaisa Yaar.
Posted by Sanket Vyas at 12:09 PM