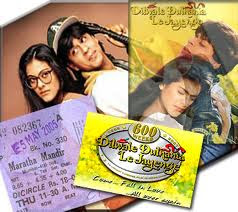 The Shah Rukh Khan/Kajol starrer Dilwale Dulhaniya Le Jayenge (DDLJ) entered its 600th week of continuous showings at a theater in Bombay on April 13 – an all-time record. The magic of the evergreen romance keeps pulling audiences back to the Maratha Mandir cinema ever since its release on October 20,1995 - and shows no signs of slowing down. The movie delighted audiences, who fell in love with the SRK-Kajol pairing, the fresh story and hit music. It was also the first Indian movie that was received well overseas by NRI audiences. DDLJ was director Aditya Chopra’s first film and at 23 (even as the son of the legendary Yash Chopra) it was a tremendous & risky undertaking. Since then he has directed only one other movie, Mohabbatein, but has been successful as a producer for many others. DDLJ went on to become one of the largest grossers in Indian film history and did extremely well at that year’s Filmfare Awards. In 2001, DDLJ broke the exhibition record, established by the classic Sholay at Bombay's Minerva Theatre (5 years: 1975-1980). 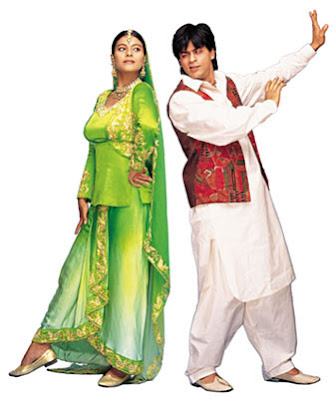 Historically and personally this movie is important to me for many reasons. After the death of Kishore Kumar in 1987 I went into a Bollywood exile of sorts and this was one of the first films that I saw upon emerging from it. It was also the first major hit of SRK as well as Kajol. I was really impressed by the acting of SRK (not realizing he would duplicate that character for virtually every role to follow) as well as the freshness of Kajol (whose unibrow had not yet become a point of distraction for me). Note to Kajol - if you are keeping the unibrow to be 'natural' why even bother with any makeup at all? But DDLJ was also special because it showed that one could grow up in the West but still have an intact Indian value system - something that sounds trite now but was rare to see in Bollywood back then. DDLJ, for all intents and purposes, brought me back to Bollywood and although Kuch Kuch Hota Hain remains my favorite SRK/Kajol starrer - this one is still close to my heart for the aforementioned reasons. For a more in depth review of this movie please visit our friend Filmi Geek's website. 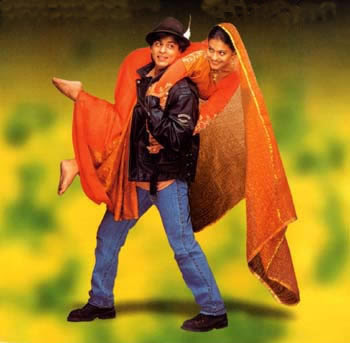 The songs for today also represent an important milestone in my opinion for a true legend in Bollywood, Lata Mangheskar, but not in the way you may think. For the last time I had heard her sing, before this movie, was in Khuda Gawah (1992) and I was saddened by the obvious decline in her voice only three years later. It was subtle mind you but for a true Lata fan it was nothing less than heartbreaking. 'Mehndi Laga Ke' sung by Udit Narayan & Lata is the centerpiece of the movie musically as well as emotionally. But my favorite song remains 'Ghar Aaja Pardesi' sung by Manpreet & Pamela Chopra as it made me miss India in ways that stay with me to this day. As they say - see it again for the first time... DDLJ.
Posted by Sanket Vyas at 5:31 PM

I had no idea that this was Aditya Chopra's first film, and that he made it at such a young age. Thanks for a very interesting and informative post.

Where do you get this information?! You're better than most beat reporters...

I just watched DDLJ a few weeks ago and I've been thinking about what makes it so special, why didn't KKHH or some other movie stay in cinemas for over 10 years. It's all much clearer after reading your post :)

DG - I was astonished when I found out his age as well. Of course Orson Welles co-wrote, produced, directed and starred in 'Citizen Kane' which is widely considered the greatest film of all time at age 26 so child prodigies are alive and well on both sides of the pond :)

LP - knowing your journalist background that is high praise indeed! I guess I got lucky enough to have the means to share my passion with others relatively easily via technology.

Alan - I can't tell you the number of times we have put KKHH on DVD after a night out as a great way to end the evening. It never gets old.

Maja - for me I think it was that the people associated with this movie knew they had something special and just threw themselves into the project - and it showed. And the truly great movies succeed by having us (the audience) insert themselves into the movie in a way - I think all of us see a bit of ourselves in SRK or Kajol - it is why their victory is ultimately ours as well.

"It never gets old."

Oddly enough, I have the same opinion of Biwi No.1. I must be pagal.

Alan - Biwi #1 is certainly one of those guilty pleasures that I can identify with - now if I can only get the creepy image of the clown doll & teddy bear coming to life in the opening song sequence out of my head... ;)

When I first saw DDLJ I didn't really "get" it, but after learning why it became such a hit, I re-watched it, and the film had a hundred percent more meaning to me.
I agree with you--although SRK and Kajol are adorable in this film, I prefer KKHH. Nothing can compare to that one!
Its hard for someone coming into Bollywood and watching movies like KKHH and Veer Zaara and then discovering DDLJ...it puts a different spin on the repetition of SRK's persona. For me, when I saw DDLJ, I had to keep telling myself this was the original, because I just felt like saying, "not this again!"

this is my #1 favorite BW movie. it was the one of the first i ever watched and the music, dance, color SRK just drew me into the BW word. love your blog thanks!